With workplaces in a state of near-constant change, now is the time to reinvent the core process that keeps your organization running. Does anyone else feel like making decisions over Zoom is a nightmare? 😩

Teams run on decision making. But with new hybrid environments, a rollercoaster economy, and every workplace process being rewritten in real time, our old models of decision making are not keeping up.

With every other aspect of workplace life turned upside down, it’s time to embrace change and radically redesign our decision-making processes as well.

I recently had the pleasure of joining Michelle Florendo on Ask A Decision Engineer to talk about how teams can design a more intentional approach to decision making.

For more tips, check out the full episode!

1. Try an iterative approach to decisions.

It’s also unrealistic for most decisions.

Don’t get me wrong, I appreciate the noble goal of summiting Mount Consensus as much as anyone. That magical moment of team unity, earned through hours of debate and discussion, can be powerful.

But consensus takes inordinate amounts of time and brainspace, and the reward is often not worth the resources.

Which is why consensus should be reserved only for large, complex decisions that you can’t walk back.

For the majority of decisions, an iterative process is much more suitable. Small, quick decisions offer learning opportunities that can expand the team’s knowledge and refine its approach.

Learning as you go, from direct experience, is far more effective in most cases than agreeing on every step before you begin.

It’s true, you won’t get to enjoy that elusive moment of team unity. Instead, you’ll enjoy something even more satisfying: efficient progress towards a targeted and well-understood outcome.

2. Use a decision-making spectrum.

When teams make decisions, they typically choose between two methods A) consensus or B) individual authority.

Most organizations, wanting to promote a culture of cooperation, first default to consensus – until it becomes too difficult to get anything done.

That’s when the pendulum swings in the opposite direction, to old-school individual authority, AKA “the boss makes the call.”

This binary strategy moves decisions forward in a painful zigzag, eroding relationships and trust along the way.

To help relieve this tension, I suggest that we think of decision making as a spectrum.

On one end of the spectrum are the decisions that are either so small that their impact is negligible, or so urgent that they require immediate action. In these situations, an individual should make the call.

At the other end are the one-way doors: the big, complex decisions you can’t undo. For these decisions, you need to move slowly and carefully, collecting information and building consensus.

But the vast majority of decisions fall between these two extremes. We need more nuanced decision-making methods that can flex with the needs of each choice. 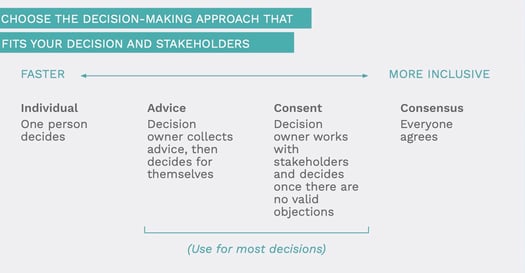 Decisions aren’t black and white, and neither should be our methods for making them.

3. Get consent, not consensus.

It’s a common mistake to conflate consensus with inclusion.

But consensus is just one way to include different voices – and it’s rarely the best approach.

Think about it. How many times, in a consensus process, have you had to choose between stifling your voice in order to keep things moving, or speaking up and derailing the conversation?

When we hold out for total agreement before moving forward, we often inadvertently dilute, isolate or silence the more marginalized perspectives in the group for the sake of unity.

One solution? Replace consensus with consent.

In a consent model, decisions move forward once no one objects, rather than when everyone agrees. 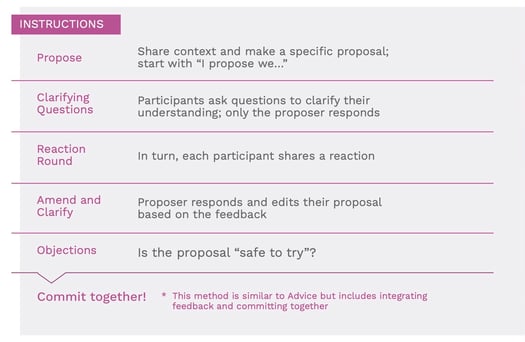 You can build consent inclusively without sacrificing speed. Give people a framework to voice their questions and concerns and then ask, "Does anyone have data that this is unsafe to try?"

This way, you can include different voices without requiring each individual to sign off on the final plan.

Reality check: Leaders aren’t naturally better at decision making than everyone else. They just have more practice at it.

Decision making is a skill, not a talent. And like any skill, it can be learned.

This is a big mindset shift for many people, especially leaders. We’ve been taught to think of decision making as something we just naturally know how to do. Great leaders make great decisions, right?

Nope. Saying leaders are natural decision-makers is like saying Simone Biles is so talented she never has to practice. 🤸🏿‍♀️

The truth is, most leaders were never trained to make complex decisions. They often figured it out by trial and error, with a dash of luck thrown in. Their good outcomes helped them climb the ranks, but they’ve rarely taken the time to develop their decision-making game.

But when we reframe decision making as a skill, we open up all kinds of possibilities for doing it better. Skilled decision-making can lead to incredible growth, but it takes intentional practice.

Today’s professional disruptions present a huge opportunity to heal chronic dysfunctions in the workplace, and think expansively about every aspect of how teams function.

Decision making is at the core of those operations.

Don’t let your past decision-making models dictate how you move forward. Take decisions off autopilot, be intentional about every aspect of the process, and redesign it to help your team and your organization function better than ever.

August Retrospective: What we’ve learned in 7 years of organizational transformation

From Great Workshops to Greater Impact